Celebrating its 25th anniversary, the "legendary Ibiza brand" will bring a huge event to Bedford Park! 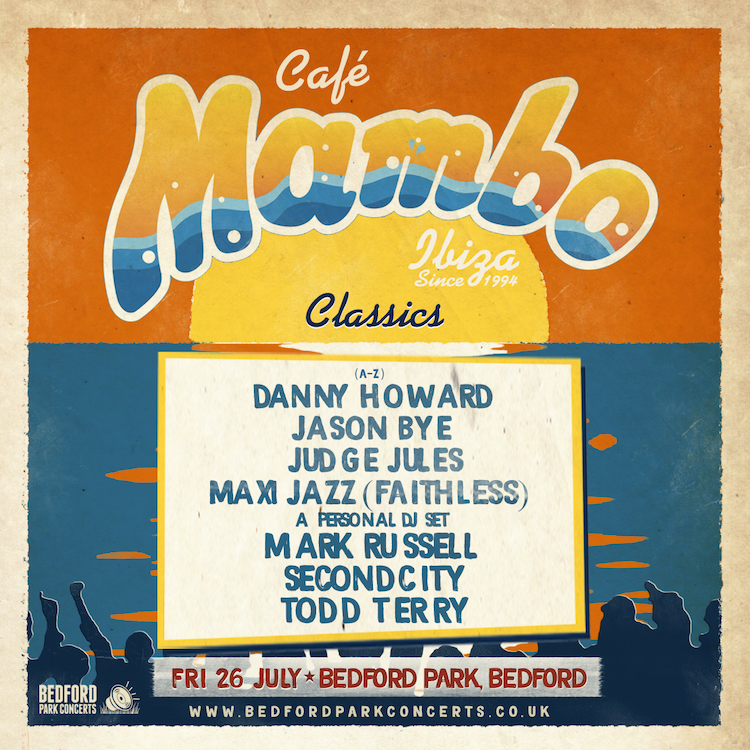 The organizers about Café Mambo... "For those in the know, Café Mambo is the place where good times and good tunes are guaranteed, playing host to all the big names in dance music, not to mention the infamous BBC Radio 1 Ibiza weekends. Over recent years, Mambo has also left the island to forge new friendships with revellers across the globe, throwing unforgettable parties and bringing an authentic slice of Ibiza to such places as Los Angeles, Miami, New York, Dubai, Phuket, Beirut and Bahrain, as well as huge festival appearances at the likes of Tomorrowland and We Are FSTVL. ‘Ibiza Classics’ in Bedford Park will be the biggest one yet."

Danny Howard: "With his Friday night, 11pm – 1am slot on BBC Radio 1,  Danny Howard is one of dance music’s most influential tastemakers. Using his radio show to champion the freshest electronic music, Danny remains a huge figure on the scene. His label, Nothing Else Matters continues to showcase outstanding DJs and producers. Bedford Park crowds should get ready to throw hands in the air."

Judge Jules: "Judge Jules has played a pivotal role in dance music since the 90’s. Together with Pete Tong, his was the voice of BBC Radio 1 Friday nights that steered the weekend clubbing adventures for a nation. With an encyclopedic knowledge of dance music, Judge Jules is the perfect choice for a night of ‘Ibiza Classics’."

Jason Bye: "Jason Bye is synonymous with the quality music of Café Mambo. The venerated Ibiza resident first played for Mambo in 1995 and has been entertaining the Ibiza clubbing masses with his impressive mixing and impeccable tune selection ever since."

Maxi Jazz: "Maxi Jazz is instantly recognisable as the voice of Faithless and his links to Ibiza run deep. Faithless became one of the biggest electronic music bands ever and Café Mambo crowds are sure to hear their bonafide Ibiza classics such as ‘Insomnia’, ‘We Come 1’ and ‘God Is A DJ’. However, this will be a personal DJ set from Maxi Jazz, stepping up to the decks without his Faithless bandmates. He will be digging deep into his extensive record collection to find some real gems."

Secondcity: "Also lining up is Secondcity, the undeniably talented house and techno producer born in the UK and raised in Chicago. Since his breakout hit “I Wanna Feel“ in 2014, Secondcity has been in constant demand around the world, playing at the most credible clubs and festivals while releasing on such eminent labels as Sola, Elrow Music, Toolroom, Knee Deep In Sound and and more. He made his Café Mambo debut last year and will bring the current vibes to ‘Ibiza Classics’. "

Todd Terry: "Todd Terry will take to the turntables with his record box of Ibiza classics. One of house music’s true originals, this Grammy-nominated artist from Brooklyn, New York helped to define house music with his seminal productions such as ‘Keep On Jumpin’ and his remix of Everything But The Girl’s ‘Missing’. His set will be a rare treat for the crowds in the park."

According to the organizers, VIP tickets include: