Get ready – as this is THE music festival to kickstart and celebrate your Summer with friends! 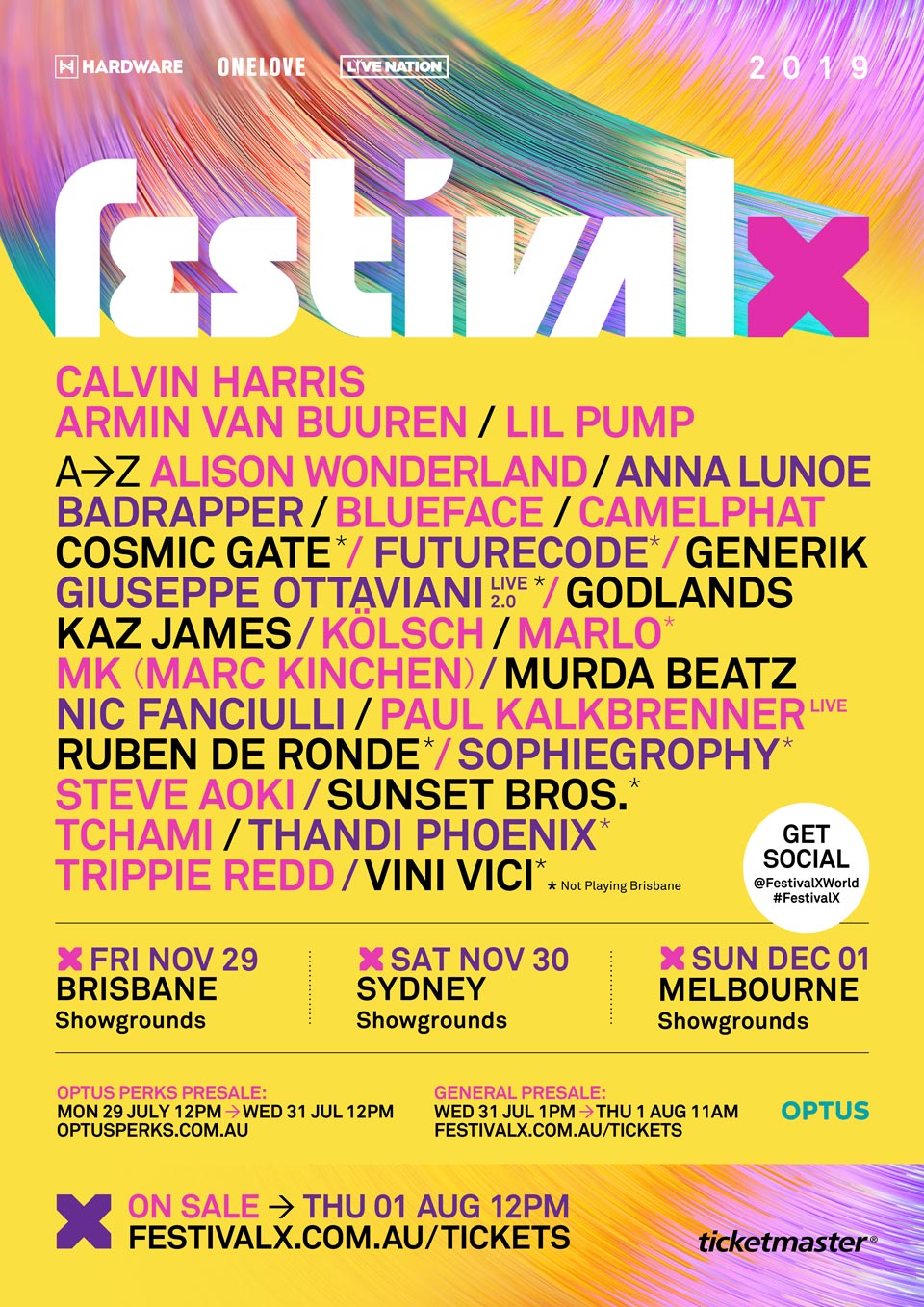 Australia are you ready?! FESTIVAL X launches this November, welcoming Summer and will feature some of the world’s biggest superstars! The inaugural festival lineup features Aussie favourite and multiple Grammy, Billboard and Brit Award winner, the inimitable Calvin Harris. The massive lineup also includes a range of Grammy, Billboard and ARIA Award winning artists, currently performing on the biggest international stages and festivals across the globe.

Committed to throwing a world class event across multiple stages, Festival X brings together three powerhouse festival and party producers.  Catering to music fans with all styles of music, including an incredible selection of: Hip Hop, Electronic and Pop music from overseas and Australia!

Grammy nominated and crowd favourite Armin van Buuren, returns to Australia after dominating worldwide with his ‘A State of Trance’ radio show and festivals.  LIL PUMP aka Gazzy Garcia will finally make his Australian debut, performing his seminal hit ‘Gucci Gang’ and a sleigh of new material.  Ohio’s rap legend TRIPPIE REDD will make it to Australia for Festival X, bringing with it his new album.  Whilst Australia's global sensation Alison Wonderland returns home, presenting her new show, hot off the heels of success with her hit ‘Peace.’

DIM MAK captain Steve Aoki pledges to launch more cake than ever and continues to be one of America’s electronic superstars! MK’s (Marc Kinchen) blend of house, club and epic vocal hits, will take on the mainstage. Melbourne's own onelove favourite (and LA-based) Generik will be back, as he continues to play across the USA with his own residency at Omnia in Vegas.

Sydney’s Anna Lunoe will take time out from her ‘Beats 1’ Radio show at Apple, to play alongside legend Tchami who knows how to bring the party! Local bass and dubstep hero Godlands from the DIM MAK camp, joins the lineup with Thandi Phoenix, whose vocals and production with Rudimental have earned her global praise.

On the tech tip, Camelphat are back and are continually banging out the hits, including their triple j fave ‘Be Someone’ with Jake Bugg.  Germany’s techno icon, Paul Kalkbrenner will return with his epic LIVE show. The emotional techno soundscapes of Kölsch will be on display and Nic Fanciulli joins us after his massively successful parties ‘Dance Or Die’ in Ibiza, alongside local fave Kaz James.

get ready for some hip hop vibes

Hip Hop don’t stop! Los Angeles based BLUEFACE is making it to our shores. MURDA BEATZ began writing Hip Hop from the age of 17 and is responsible for producing the likes of: NICKI MINAJ, GUCCI MANE, DRAKE, MIGOS and more! Alongside TRIPPIE REDD and LIL PUMP, the talented BADRAPPER and SOPHIEGROPHY will also perform.

Local hero MaRLo will return home after selling out his national ‘Altitude Tour’ to over 15,000 fans in record time. Vini Vici from Israel return with their signature sound, whilst Italy’s Giuseppe Ottaviani brings his 2.0 LIVE show to Australia.  Ben Gold and Omnia have just launched their FUTURECODE project and will be playing Melbourne and Sydney.  In addition to this talent pool, trance faves Cosmic Gate will return with Sydney heroes Sunset Bros.

Across multiple stages, Festival X has something for everyone.  Bring on the international flavour, good times & Aussie Summer!

Find more information on the official website and visit our event pages ( Brisbane, Sydney, Melbourne) for accommodation opportunities. Follow us on FACEBOOK and INSTAGRAM for both latest lineup updates and festival impressions right in your hands.