Airbeat One 2018 is just around the corner

Fulminant! This has never been the case in the 17-year history of the spectacular AIRBEAT ONE festival: almost 170 DJs and acts from all over the world will jet into the tranquil town of Neustadt-Glewe, from 11th to 15th July 2018 to be part of the largest, north German music festival of the electronic dance scene.

On the guest list, there are around 50,000 visitors from 45 nations per day who make the four-day open-air with the motto "Great Britain" a bombastic venue for groundbreaking event productions. With a setting like this, it is no wonder they are ranked #12 in our global top100 festival list. The music will be as multifarious as the festival. From EDM to Trance and Progressive - from Hardstyle, Hardcore and Gabber to Techno, Minimal and House. Different styles. One sound.

With Dimitri Vegas & Like Mike, Armin van Buuren, Hardwell, Tiësto, Afrojack, Steve Aoki and Marshmello, seven superstars from the top 10 of the world-famous DJ Mag will take part in the open-air happening. These absolute top-class superstars will definitely make the crowd in front of the "Mainstage" go crazy in a peaceful, taboo-free way. 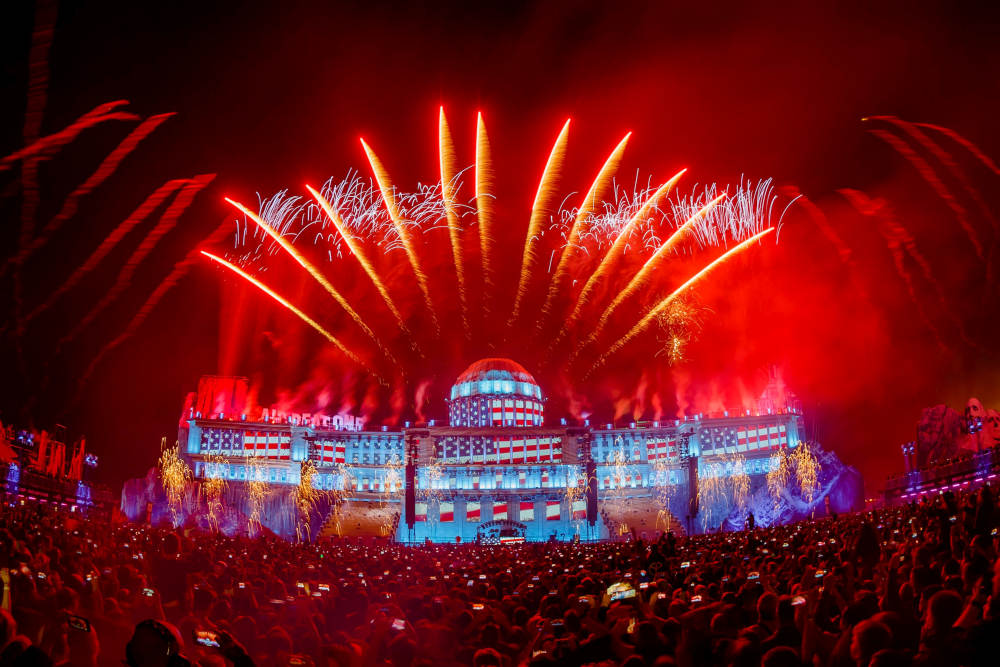 The "Mainstage" - with a width of 130 meters and a height of 40 meters - is once again the absolute eye-catcher this year with its impressive size it is a festival giant that has never been seen before in Europe. True to the motto "Great Britain" one can be curious what artwork the party crowd can expect. Is it a cover of Big Ben? Or maybe it's the Houses of Parliament? The Tower? Or a replica of Westminster Abbey? Great Britain has many buildings worthy of being designed as a festival stage in lavish and lovingly planned details. As much as the rumour mill is seething - the stage design is and remains top secret until the festival opens.

Premiere at AIRBEAT ONE! Because two more floors will in 2018 shine in the UK-look: the "Terminal" and the "Second Stage". There are also a lot of speculations on how the respective floors will look. Sure is: The Queen would be "very amused". She would also be astonished what she gets to hear. On the "Second Stage" there will be acts from the areas of Trance, Progressive and Goa, such as Fabio & Moon, Klopfgeister, Audiomatic, Schrittmacher and Perfect Stranger - to name just some of the 38 DJs and laptop acrobats.

In the "Terminal" it gets deep. The tent promises pure club feeling: intimate, smoky, dusty and foggy atmosphere. Like a London underground club. The Musicmasters: Gestört aber GeiL, EDX, Ofenbach, Lexy & K-Paul, Watermät plus another 14 tech titans perform on this stage. New in 2018 is "More @ Terminal": From 02:00 to 08:00 DJs from the divisions Techno, Tech House and House are waiting with their straight beats in the starting blocks. The Stockholm drum code label owner Adam Beyer is one of the world's most successful of its kind. And the South African Black Coffee is one of the top leagues, as well as the man with the mask - Claptone - or the "Deejay Gigolos" legend DJ Hell.

"Typically British" could be the subline of the AIRBEAT ONE festival, which will be designed in a UK-like way for 2018. For example, typically British is also the British pound. A currency that is paid in plastic form at this major event near Schwerin. Because the event introduces its own cashless payment system. Currency reform at AIRBEAT ONE!

Bigger, better, AIRBEAT ONE! Next update: The infield of the airfield area will be expanded. This meeans: More space to party, dance, meet & greets. Besides that, this means more space to create another floor: With "The Arena", the largest, transportable circus tent in Europe moves onto the site and almost takes on the size of a football field: 5,000 square meters, 30 meters high. Breaking News: Transmission celebrates its exclusive festival premiere at AIRBEAT. It is hosted by the boys and girls from "boombox", with Borgore, Carnage and Smiie at the start on Thursday - while on nights from Friday to Saturday and Saturday to Sunday the heroes of the "Transmission" event series like the native German and Miami-based Markus Schulz, trance pioneer Ferry Corsten with his side project Gouryella, and the kings of the mellow trance - matching the “Great Britain” motto! - Above & Beyond are confirmed.

Need some more big announcement? Check! New and unprecedented: a pre-opening party of the AIRBEAT ONE festival taking place on Thursday. Guests can duly ring in on the grounds and on two floors of the biggest event of electronic music in Northern Germany. Opened are "The Arena" (with Cascade, Blasterjaxx, Nicky Romero and others) as well as the "Second Stage" (with Fabio & Moon, Day.Din and others).

"The same procedure as every year"? Not with us! Although the RAM crew around “Q-Dance” will be there in 2018 again, the hosters don’t put their money down on copy & paste for the second largest floor at AIRBEAT ONE - no! No fearsome, snappy gorilla zombie like 2017! This time, the animal-like Q-Dance-Chicken, which is equipped with pyro and laser from top to bottom, provides for shuddering moments - while the sound is of course unchanged: unchanged hard. The Floor is nothing for wimps and cuddly bunnies. Hard, harder, Q-Dance! Here are the representatives of the most blatant and fastest sound on the decks that the scene has to offer. If you only want 120 BPM, this is wrong! Q-Dance - everything else is hit!

Mr. Bean, Monty Python, James Bond - they are all connected to Great Britain. And while 007 has the license to kill, the party people at AIRBEAT ONE have the license to party. To perfectly controlled sound, to meticulously programmed light and laser shows. With pyro effects like fireworks that shoot a hundred meters into the deep black night sky. With dozens of CO2 cannons bouncing white shots across thousands of visitors on the dancefloor. And with umpteen flame jets, which provide a hot atmosphere at the cool party. A show technique that is second to none and that you can marvel at and admire at hardly any other festival of this feudal size. "Very nice", as the Brit would say.

Speaking of Britain: While every day at 4pm "It's Tea Time" for Queen Elizabeth, for all football fans at the AIRBEAT ONE festival it's called "Kick off!" time. On Saturday, July 14th, the game for the third place will be shown in the "Terminal". Three days earlier, on Wednesday, the second semi-final will be streamed live, on the Food Mile. So close by, where visitors can swirl through the air during the festival and be shaken up: on the amusement mile, where various rides provide a breathtaking adrenaline rush.

Tickets are still on sale through our ticket partner Festicket. 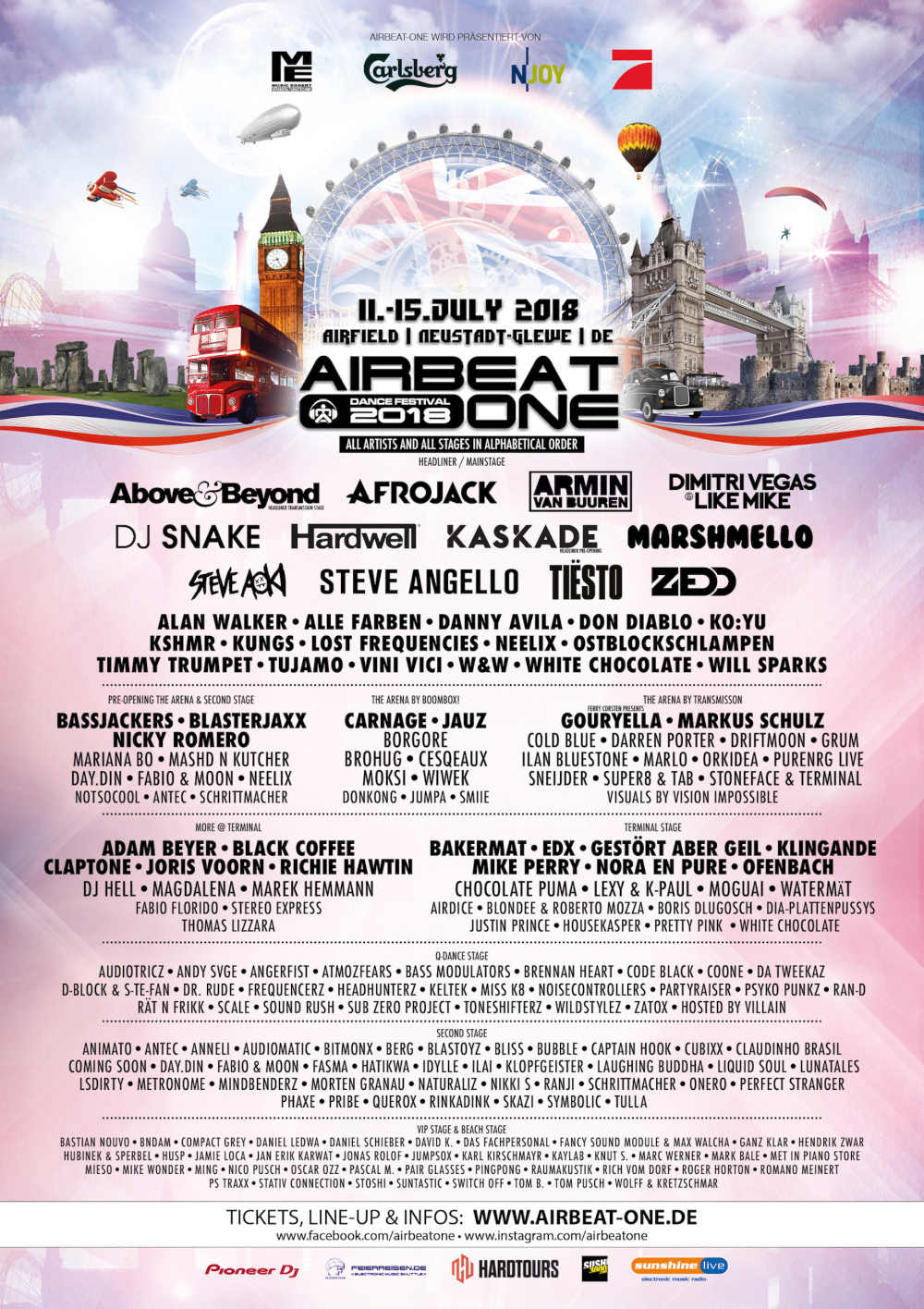